It was probably my most action packed and photo filled day that I’ve had! On my last post talking about being at the right place at the right time, I had a great day out shooting at the races and I was totally juiced about the pics that I was able to grab. While driving home and crossing the Golden Gate Bridge I could see that the conditions were, for the second time in as many weeks, clear as a bell and the warm weather didn’t seem to be letting up. 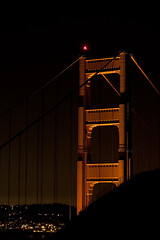 North TowerI told Paul at that moment that I was coming back into the city to do some shooting that night and he declined my invite. I was on the phone quickly with Tom and setup to meet up for that night’s shooting and I continued driving home to get some rest. As soon as I got home the batteries went on the charger and I dumped what I had on my memory card.

The first stop for Tom and I was Twin Peaks where I wanted to shoot another panorama of the city since last time we were up there it was quite hazy. I wasn’t letting the opportunity on this clear night go to waste. Neither were the couple hundred other people that we joined up there! 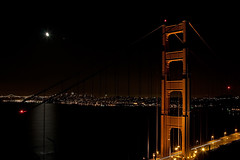 City LightsWe hit a couple other spots that night but the one that we spent the longest at was the Marin Headlands overlooking the Golden Gate Bridge on Conzelman Rd. As usual, we didn’t get out there until pretty late, about 1AM. We drove up the road and got to the point where they close gates across the road and parked there. Luckily, I spotted a park ranger nearby and checked with him to make sure that I wasn’t going to get towed. Amazingly, he didn’t seem surprised to see us out there that late and let us know that we were welcome to continue up the road past the gate as long as we were on foot.

Golden Gate MoonTom and I continued on in weather that was uncharacteristically warm and conditions that were unbelievably clear. Even as we left to head home at almost 4AM I wasn’t feeling nary a chill running around in only shorts and t-shirt! It seemed almost too perfect: We would stop to shoot and every spot was breathtaking. We continued up the hill and every time that we stopped it seemed better than the last.

There are at least half a dozen excellent spots to shoot from on this road and many of the iconic shots of the Golden Gate that you have seen have been shot from here. If you’re in the area, this is a must visit spot anytime of the day. In fact I went back just yesterday just to try to get some shots of the bridge shrouded in fog. It looks like I’m starting a collection! 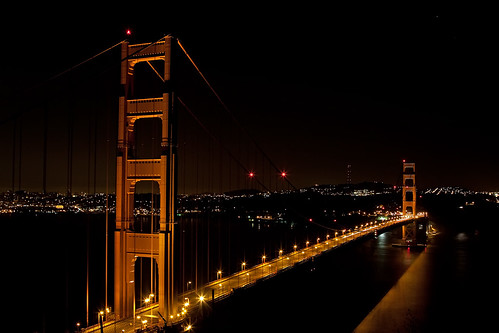 This entry was posted on Friday, May 22nd, 2009 at 5:39 pm and is filed under Blog, Photos. You can follow any responses to this entry through the RSS 2.0 feed.