It may not “technically” be the start of summer – that doesn’t come until June 21st – but it’s close enough for me! We’re getting good weather here in Northern California and the last few weekends I’ve been out enjoying the road with friends.

Last Sunday I met Paul up at Alice’s Restaurant for a bit of breakfast to kick off a day of riding up in the hills. We ate, headed across the street to gas up and ran into a couple more friends that were planning on heading out the same way down Hwy 84. One of my buddies, Jed, is starting a company doing riding tours of some of the more popular Bay Area back roads (not the TV show) and wanted to get some pics. Paul and I were also planning on taking some shots of him today with his new bike, a KTM 950 Supermoto, so we all headed out together to pick a corner and capture some of the action.

Camped out a hairpin corner, I set down my gear, started taking off my helmet and I hear the high pitched whine of a sportbike coming down the hill and downshifting for the corner. I barely had my camera out in time and I managed to click off three or four shots as the rider came into the corner pretty hot, set his knee out and scraped it all the way around the corner. “Great!” I thought, “ That was exactly what I wanted to start grabbing some pics of!” Unfortunately, even though I was able to click off the shots, they were horribly over exposed and wouldn’t do. 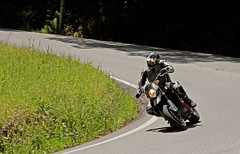 Comin’ AroundWith that I told Paul and Jed that they had to get out there and give me something good, but you know, no pressure or anything… ! From Paul’s supermoto styled foot out cornering to Jed’s knee on the ground steep lean angles, I was able to grab some pretty good shots. It’s feeling really great this summer to be able to combine the two passions in my life: photography and motorcycling.

With the exception of shooting the stunt show put on by Jason Pullen a few weeks back, I don’t get a chance to capture images of fast moving subjects and it’s something that I want to get better at. This day up on the hill with the guys was good practice and hopefully it pays off! I’m going to be at Sears Point (Infineon) Raceway tomorrow for the AMA Superbike Showdown and the XTRM AMA Supermoto Championship. I hope to get more good captures of some of my favorite racers while enjoying another fun day in the sun.

This entry was posted on Friday, May 15th, 2009 at 3:21 pm and is filed under Blog, Photos. You can follow any responses to this entry through the RSS 2.0 feed.