It was another one of my late nights out shooting and I was set to head to the darkest areas I could for some long exposure experimentation. The shot above is on the beach at Crissy Field in San Francisco at, believe it or not, 1:30AM and was one of three attempts that I made at getting it. It was so dark out there that I could barely see the building at the end of the boardwalk and the camera would not focus. I ended up using a flashlight to get the camera to focus on its target, but I shot with only available light for a thirty second exposure to get this image. 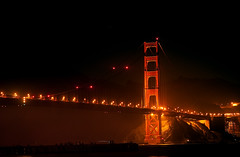 People on the PierI was sure that my buddy and I were the only ones out there, but if you look closely at the pier in this shot of the Golden Gate Bridge, you can see a group of people hanging out. I didn’t see them until processing the pic later the next day. It was a little hazy that night and I’ll be heading back out soon to reshoot but you sometimes never know what you’ll find in the night.

I didn’t end up getting home until 4AM that night (uh, morning?!) and had to be up in just 5 hours to go for a Sunday ride and take more pics of bikes carving through some canyons. But it was worth it since I got to shoot and scout out many more places to go soon. It was definitely a full night and we probably hit seven separate locations in SF in one night – all within a 10-15 minute drive of each other! 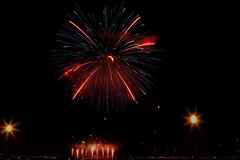 KFOG Kaboom!Earlier that evening we went to the KFOG Kaboom, a fireworks show synchronized with music along the bay at piers 30/32. It was my first time shooting fireworks and I got some tips on the web earlier in the day. It seemed to work out and I came away with a few shots that I like.

Another good night of shooting in the Bay! 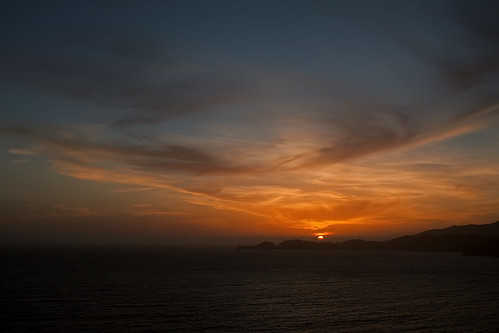 Coming Back for the Sunset

Out to Pasture – Listen to Your Heart

This entry was posted on Tuesday, May 12th, 2009 at 2:51 pm and is filed under Blog, Photos. You can follow any responses to this entry through the RSS 2.0 feed.

One Response to “More Late Nights”